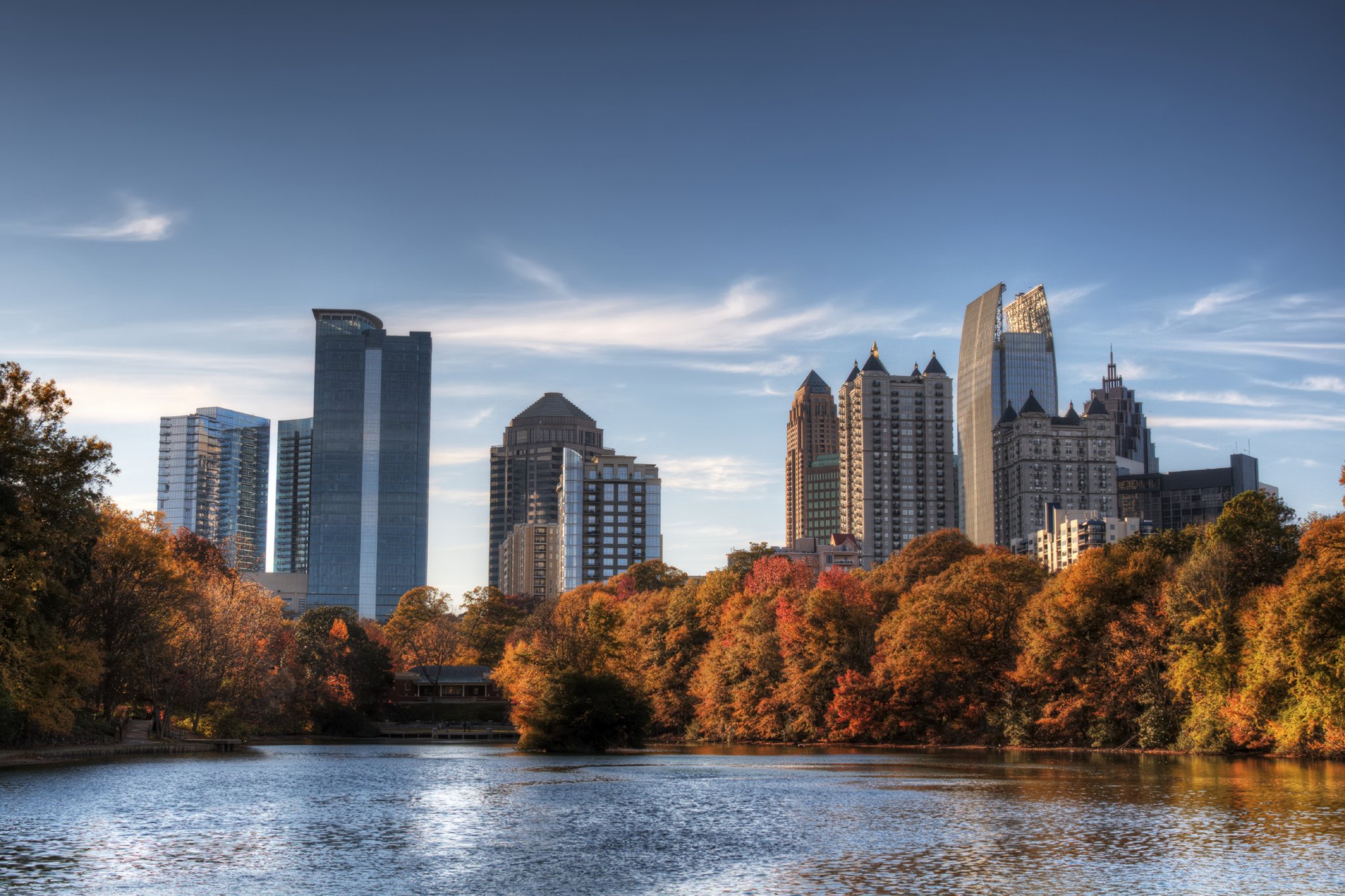 Alanta, the capital and most populous city in Georgia

Atlanta is one of the most favorable destinations in the country for meetings, and conventions with its short flight time of 2 hours from 80 percent of the U.S. population and its high elevation that distinguishes it from most other southern and eastern cities offering a more temperate climate making Atlanta a excellent choice for groups of any size. To book hotel reservations in Atlanta, use our online reservation tool.

Located five miles south of downtown Atlanta, the Hartsfield International Airport greets over 35 million visitors from around the world each year and is the seventh most visited city in the United States. With the airport's ongoing major improvements, it is easier and more efficient today, to get around the city with its Metropolitan Atlanta Rapid Transit Authority light rail system or even to rent a car at the airport. Attendees will appreciate the efficiency and improved time it takes getting out of the airport, traveling to their designated Atlanta hotels and meeting facilities from the airport.

Since the 1996 Olympic Games, Atlanta is home to many new and renovated meeting facilities. The city promotes 2.1 million gross square feet of exhibit space and five major convention centers such as the Georgia World Congress Center as one of the largest multi-purpose sports and entertainment complexes in the country with its 200-acre campus consisting of three versatile exhibit buildings: the Congress Center itself, the 71,250-seat Georgia Dome, and 21-acre Centennial Olympic Park. Not far from these meeting facilities you'll find over 10,000 hotel rooms making this an exceptional location for meeting planners to consider.

Another meeting option is the Georgia Aquarium, the world's largest indoor aquarium and one of the most popular event locations in the city. The Atlanta Convention Center, one of the world's largest wholesale marketplace, creates and operates over 23 trade shows a year. The self-proclaimed heart of Atlanta's arts and theater world is the Woodruff Arts Center offering 34,000 square feet of indoor and outdoor space. Thanks to Atlanta's climate and short winters, The Chastain Park Amphitheater is an excellent choice for outdoor events, along with the 21 acre Centennial Olympic Park now available for private events by permit, and for elegant evening affairs, inside or out, the Piedmont Garden Tent or 5,500 square foot Piedmont Room, decorated with ivory table linens, and tea candles a glow.

Midtown Atlanta has become the heart of the city with its high-rise office space, condos and flats, green open spaces, chic boutiques and retail shopping, some of the best dining and nightlife in town and is the city's second-largest business district. Midtown contains many of the region's law firms, and is also known for its art institutions, cultural attractions, and institutions of higher education. Buckhead, the city's uptown district, is eight miles north of downtown and the city's third-largest business district.

While embracing the past and present, Atlanta's architecture blends the modern buildings, sporting facilities and entertainment venues. Atlanta views itself as the leading city of a progressive "New South" and over the years have opted for modern structures with the city's landmarks looking more like the Northeast or Midwest. Atlanta ranks number 3 for Fortune 500 companies headquartered in city boundaries after Houston and New York City. The city metro areas are home to three Fortune 100 companies: The Coca-Cola Company, United Parcel Service and Home Depot. Fifteen of the largest companies in the world are headquartered in Atlanta and is home to influential schools: Emory University and the Georgia Institute of Technology.

The Atlanta neighborhoods are as unique as the people are themselves that inhabit their locality. The city's culinary scene, comprising a mix of urban establishments that have earned national attention, include ethnic restaurants serving cuisine from every corner of the world, to traditional eateries specializing in Southern dining that will delight the senses. Take in the respected neighborhood of Buckhead for a tour of historic Southern mansions, the Georgia Governor's Mansion and the Swan House. At the Lennox Square Mall, visitors can shop high-end retailers or for a more casual experience, discover Virginia Highland, the southeast's exciting dining, shopping, and entertainment district where you'll find quaint sidewalk cafes, cozy coffee houses, fabulous antique stores and art galleries.

If you are a history buff, yesteryear abounds with attractions to see, delight in, and ponder while visiting Atlanta. The Atlanta History Center, a unique campus of attractions together serve as one of the largest history museums in the nation. More than 650,000 visitors a year pay their respects to Dr. King at the King Center, the memorial of the leader of the Civil Rights Movement. And the Atlanta Cyclorama and Civil War Museum with artifacts and the world's largest oil painting depicting the Battle of Atlanta will provide such history substance like no other city, Atlanta Georgia.

Atlanta is home to four professional sports teams: the NFL's Atlanta Falcons, the MLB's Atlanta Braves the NBA's Atlanta Hawks, and the NHL's Atlanta Thrashers. Enjoy a sporting event at Turner Field or the Georgia Dome to see one of the home teams and if you are a golfer, take in one of Atlanta's 70 public golf courses, or the local favorite Bobby Jones Golf Course.

An evening out at any of the several coffeehouses and neighborhood pubs offer live music, a great time to relax and enjoy the night scene. Experience Virginia-Highland's establishments, and at Little Five Point's enjoy anything from jazz, funk and reggae music. From world-class attractions and delicious cuisine by top chef's to gorgeous neighborhoods and Southern charm, Atlanta has become one of the most popular places to live, and visit in the Southeast.

Whatever type of group you represent, we can assist you in finding the perfect hotel venue for your upcoming event, by saving you time, and money. And, there is no charge for our service. Just complete our online group form request and we will provide you with proposals by email, help you select the right hotel, and negotiate the best rates!