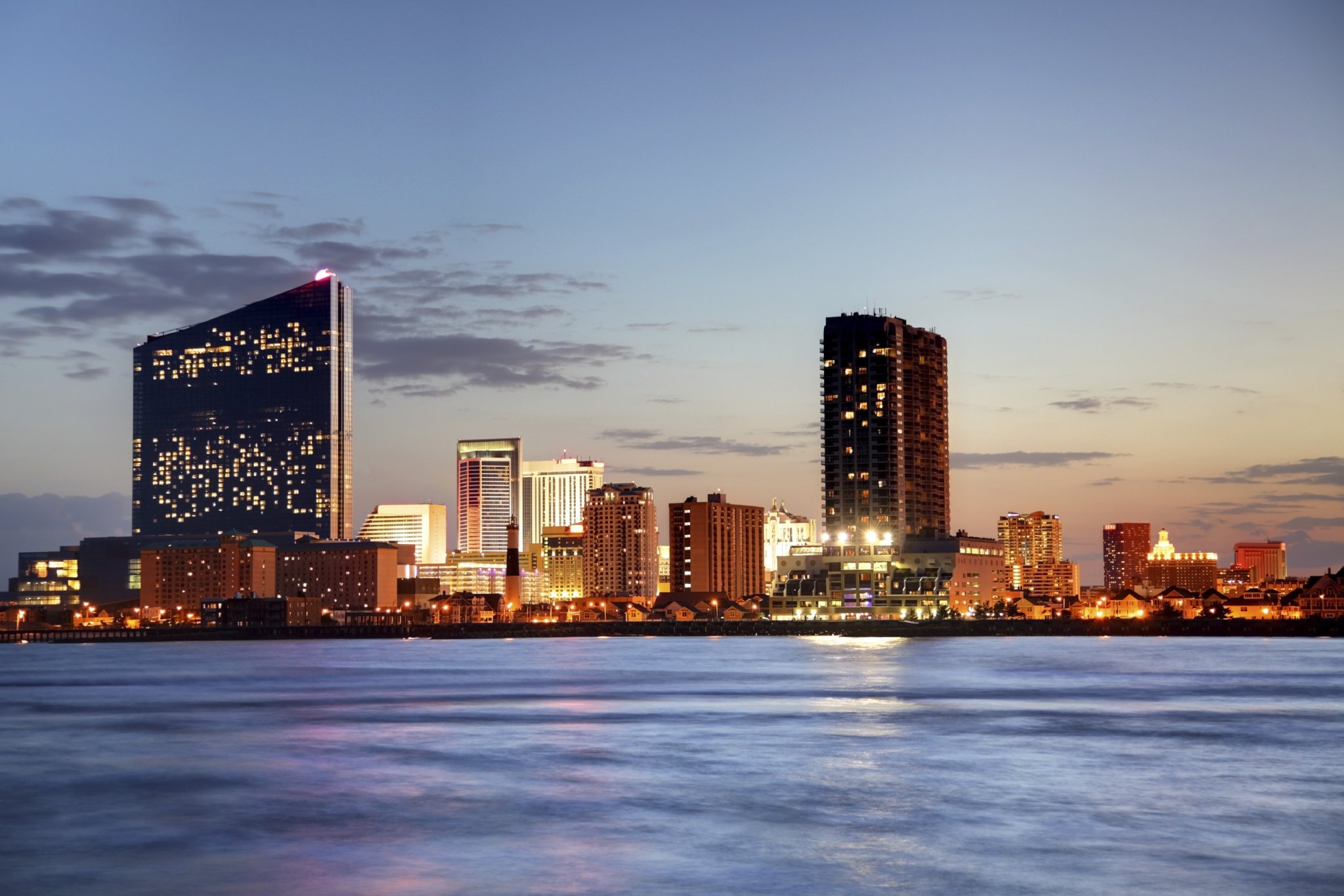 Atlantic City, a resort destination for
leisure, conventions and gambling.

Atlantic City New Jersey By air, by train, by bus, travelers young and old head to Atlantic City to getaway from the hustle and bustle of everyday life to enjoy this captivating seaside resort. Originally, Atlantic City was designed as a healthful respite from city life, however, it quickly became a popular vacation destination, providing endless opportunities for fun and entertainment, much like it is today.

With 12 world famous resort casinos and many hotels, dining, attractions and shopping, corporate meetings, conventions and tradeshows from all over the country, and groups by motorcoach continue to flock to Atlantic City from major population areas like New York City, Philadelphia and Washington, DC to enjoy all things Atlantic City.

Atlantic City is considered the "Gambling Capital of the East Coast" and is second to Las Vegas in number of casinos, yearly gaming revenue, and number of rooms. For meeting planners, this city offers 12 fabulous resort hotels and casinos and many other hotels as a value destination Sunday through Thursday making Atlantic City a viable option for meetings, conventions and trade shows. Attendees can enjoy the sites and sounds of Atlantic City, with spectacular views of the ocean while attending a conference or convention, knowing most of the city's major attractions, hotels, dining, and convention areas are located along the boardwalk.

Within a five hour drive, about a third of the population in the U.S., can arrive by car or motorcoach making Atlantic City easily accessible. For those traveling by air, you have two choices, direct flights to Atlantic City International Airport or Philadelphia International Airport. Direct train service from Philadelphia's 30th Street Station and New York's Penn Station is also available.

Located right on the waterfront, the Atlantic City Convention Center, opened in 1997 and is still one of the largest convention centers on the east coast with nearly 500,000 contiguous square feet of space. The Atlantic City Convention Center, won the prestigious "Award of Excellence in Architectural Design" from the Pennsylvania Society of Architects for its plan to incorporate the city's seaside location and regional decor into the design.

The motif of the convention center represent local sea life such as starfish, crabs and seahorses and the functional space includes; 45 meeting rooms that surround the 90-foot-high sky-lit atrium lobby; five spacious exhibit halls are located on the building's second level, ranging in size from 29,400 square feet to 199,500 square feet and can be transformed into a ballroom or banquet hall; group facilities include a 70,000-square-foot event center with unobstructed views, a general session area for up to 5,500 attendees including a 30,000-square-foot-columnless ballroom and a 15,000-square-foot amphitheater; a 30,000-square-foot meeting center, 20 meeting and boardrooms featuring a conference registration facility and a complete integrated business center; 60,000 square feet of indoor hospitality space with high-rise suites, VIP salons, pre-function areas, private reception areas, and dining venues; and 90,000 square feet of outdoor hospitality space including a private beach, outdoor lobby garden and cabana area.

The Atlantic City Boardwalk, the first in the United States, opened in 1870, as a way to keep sand from the beach out of the hotels and train-cars. The boardwalk starts at Absecon Inlet in the north and runs along the beach south-west to the city with hotels, casinos, retail stores, restaurants, and amusements running along side the boardwalk so people can eat, stay, shop, gamble while enjoying the beautiful ocean view. Attractions include the Boardwalk Hall, House of Blues, and the Ripley's Believe It or Not! museum. In October 2012, Hurricane Sandy destroyed the northern part of the boardwalk fronting Absecon Inlet, in the residential section called South Inlet. The oceanfront boardwalk in front of the Atlantic City casinos survived the storm undamaged.

At the turn of the 20th century, Atlantic City went through a huge building boom, transforming the Atlantic City boardwalk into a major tourist destination on the East Coast, with grand hotels and amusement parks at Ocean Pier. Two of the city's most distinctive hotels were the Marlborough-Blenheim and the Traymore Hotels respectively. This city became a popular destination for many prominent Philadelphians, the New York and Washington D.C. rich and famous, and other nearby cities to relax and have fun in this extravagant resort town.

There are guided sightseeing trolley tours, stopping in both the historic town of Smithville and Cape May. For those who enjoy relaxing, pull out your swim suit or shorts, take a few steps out of your hotel lobby, to soak up some sun at the beach. Whatever your pleasure, as a meeting planner, Atlantic City has it all, modern and incredible resort hotels with meeting, convention, and trade show facilities, state of art technology and amenities, fabulous dining, shopping and attractions, all in about a 20 square mile radius.

Whatever type of group you represent, we can assist you in finding the perfect hotel venue for your upcoming event, by saving you time, and money. And, there is no charge for our service. Just complete our online group form request and we will provide you with proposals by email, help you select the right hotel, and negotiate the best rates!