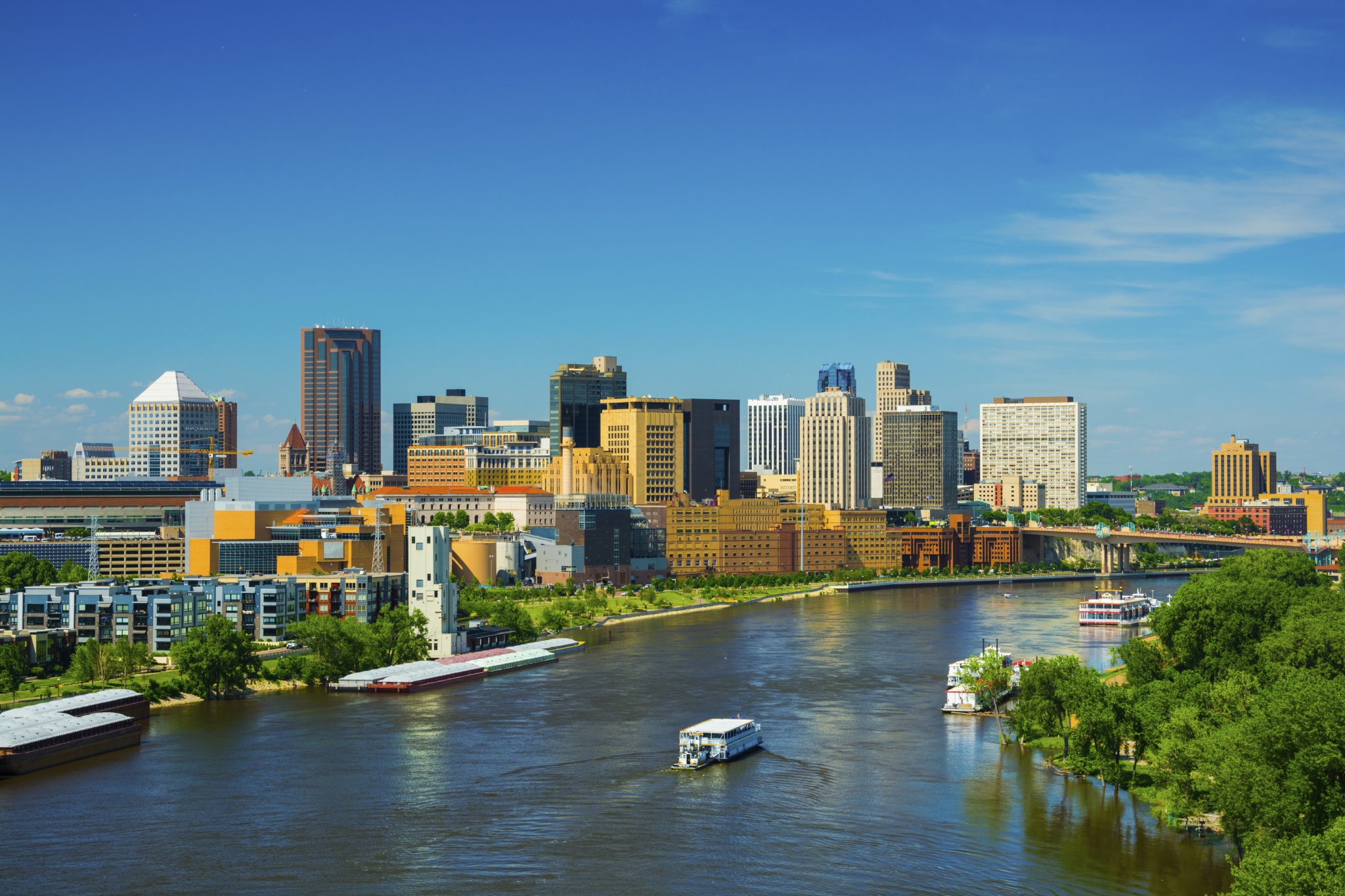 Minneapolis, nicknamed "City of Lakes" and the "Mill City"

Minneapolis-St. Paul is a sparkling metropolis, accessible meeting and convention city with over 30,000 hotel rooms offering economy and mid-range lodging to luxury accommodations and is one of the most vibrant and engaging cities in the United States.

You'll find exceptional restaurants, cool shops, a festivity of events, diverse entertainment, professional sports, and broadway shows that keeps downtown Minneapolis constantly on the move. This city is a destination and community all in one, with its safe, friendly and compact environment making it a perfect location for your next conference or convention.

The Minneapolis Convention Center offers 475,000 square feet of exhibit space, 87 meeting rooms, award winning catering services, and fully-equipped modern technology that is second to none. Whether you are planning a small board meeting of 25, a larger conference of 2,500 or a reception of 10,000, the convention center is equipped with services and amenities to ensure its success.

With the climate controlled skyways, conveniently attached to the Minneapolis Convention Center and 3,500 sleeping rooms and other downtown attractions make this city a possible site for year round meetings and conventions. Seven miles of the enclosed pedestrian bridges, skyways, link eighty city blocks downtown. Second floor restaurants and retailers connected to these passageways are usually open on weekdays.

The city is abundantly blessed with water, Minneapolis sits on both banks of the Mississippi River, north of where the river comes together with the Minnesota River, adjoining the state capital, Saint Paul. This metropolitan area is known as the twin cities and is the 16th largest city in the U.S.

The Minneapolis park system has been called the best designed and best maintained in America with the finest landscape architecture, preservation of geographical landmarks linking them together with main streets, parkways and its Chain of Lakes, five lakes, the largest, Lake Calhoun, provides biking, running and walking paths with swimming, picnics, fishing, boating and ice skating.

Visitors can tour the city on the Minneapolis Queen, an authentic paddle wheeler offering public tours and private charters on the Mississippi River cruising through historic downtown Minneapolis that departs from Boom Island Park.

Minneapolis-Saint Paul International Airport to Downtown Minneapolis is about 16 miles one-way. The airport serves three international, twelve domestic, seven charter and four regional carriers and is a hub and home base for Delta Air Lines, Mesaba Airlines, and Sun Country Airlines. The Rail Lines known as the Blue Line serves 34,000 riders daily and connects the Minneapolis-Saint Paul International Airport and Mall of America in Bloomington to downtown. The Metropolitan Council's Metro Transit, which operates the light rail system and most of the city's buses, provides free travel vouchers through the Guaranteed Ride Home program to allay fears that commuters might otherwise be occasionally stranded if they work late hours.

Even though Minneapolis experiences cold winters, it is a year round tourist destination, has cultural organizations that draw creative people and audiences for theatre, the arts, and music, is one of the most thriving corporate climates in the country, and home to twenty diverse Fortune 500 companies which include Target Corporation, 3M, General Mills and Best Buy, among others, and weathers volatile economic conditions better than other major city. Minneapolis is the primary business center between Chicago and Seattle, with Minneapolis proper containing the fifth highest concentration of Fortune 500 companies.

The region is known worldwide for its highly educated population and thriving cultural scene that rivals much larger cities. Its thriving theatre community, home to 100 performance groups is second only to New York City in live theater per capita and is the third largest theater market in the U.S. after New York City and Chicago.

Minneapolis is home to 35 museums; the arts, sciences and history, a few of the galleries include Minneapolis Institute of Arts, Walker Art Center, and the renowned Minneapolis Sculpture Garden.

Whatever type of group you represent, we can help you find the perfect accommodations, meeting and banquet space for your event. Complete our online group form request and we will provide you with proposals by email, help you select the right hotel, and negotiate the best rates! All at no cost to you.