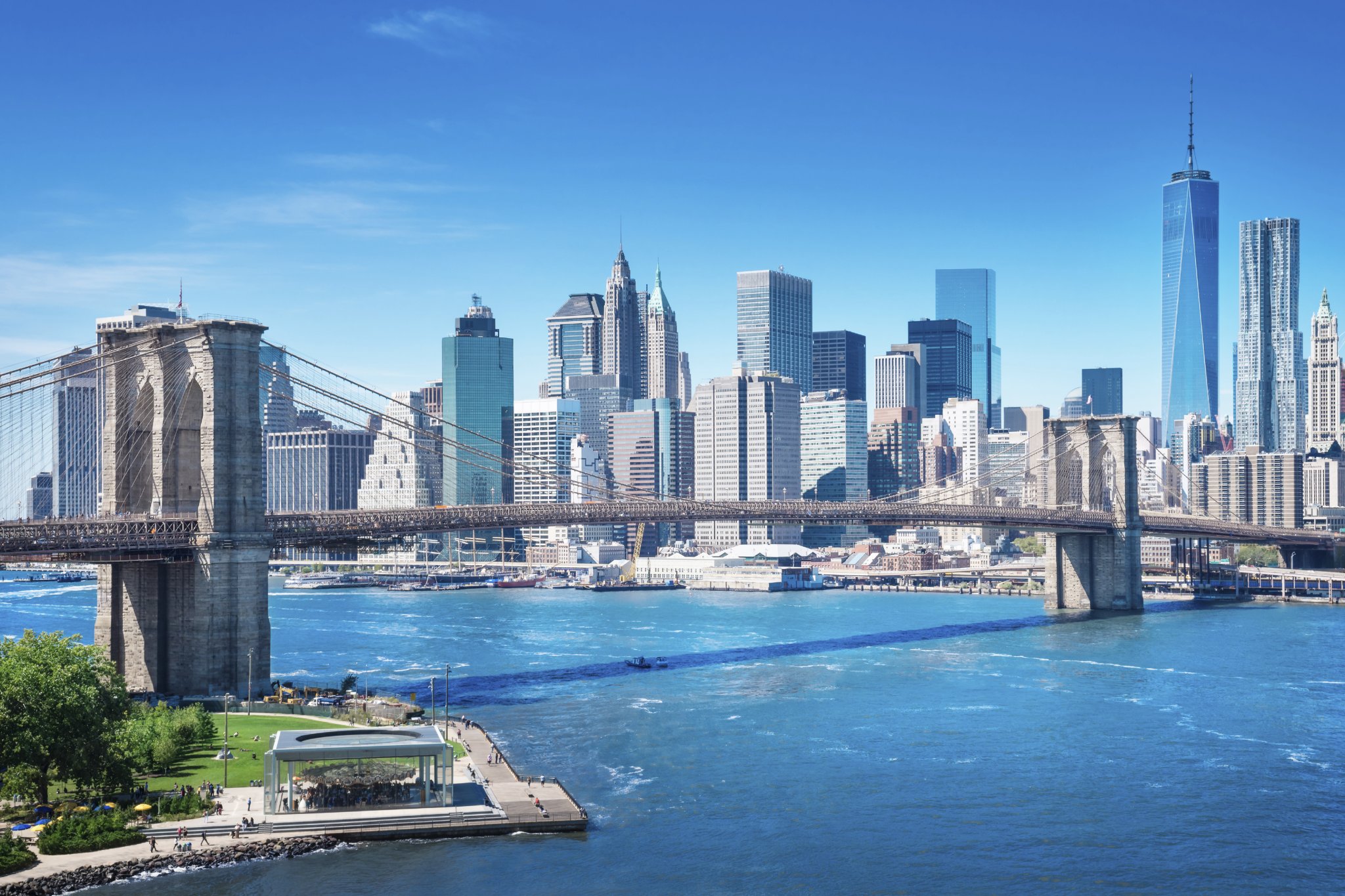 New York City, the most populous city in the United States.

As a popular destination, New York City is easily accessible with competitively priced domestic and international airfares, offering over 85,000 affordable to exceptional hotels rooms, 18,000 restaurants, reliable and inexpensive 24/7 transportation in the city with unique and amazing city venues to choose from when putting together a meeting. Just getting around New York City can be an adventure in itself.

Three airports in the New York City area serve both domestic and international travelers, LaGuardia, John F. Kennedy International and Newark Liberty International with over 100 million passengers annually. After arriving in NYC, around the clock ground transportation is available to most areas of New York with public transit, buses, ferries, and one of the most extensive subway systems in the world transporting millions of riders every day. MetroCards can be purchased in vending machines in every station, and is the only acceptable form of payment to ride the subway. Every line is identified by either letter or number and free maps are provided at manned token booths.

Just to give you a visual idea of the size of the Manhattan area, it's 13.4 miles long and 2.3 miles wide at its widest. The borough's avenues run roughly north and south, and streets run east and west, except at its northern and southern tips. One-way streets are prevalent, with traffic moving east on even-numbered streets and west on odd-numbered streets. For short distances downtown, there's no better way to see the city than to walk it.

New York City accommodations and attractions are by far an ongoing surprise of upgrades and expansions for the city. With about 90,000 hotel rooms in the city, new properties and renovated landmark favorites continue to polish their look by making good use of their space with renovations, and adding state-of-the-art technology for meeting planners. The Plaza Hotel re-opened with a $400 million renovation that now offers 282 luxurious guest rooms, offering a posh and alluring facility to event planners in this amazing city. Meeting planners will find upgrades at New York City's best hotels include more spacious and roomy facilities for meetings and banquets.

The Jacob K. Javits Convention Center is the marketplace of the world, spans five blocks, ranks among the top 20 largest convention centers in the United States, boasting 760,000 square feet of exhibition space and about 28,000 square feet of meeting space that includes over 100 meeting rooms. The center provides electrical, plumbing, telecommunications and cleaning services for all booked events. The convention center amenities includes state of the art technology, the ability to serve 10,000 meals simultaneously, along with plasma television screens for exhibitors.

Other excellent choices for large events include Madison Square Garden, home of the New York Knicks, or the New York's majestic Radio City Musical Hall for up to 600 guests. For smaller meetings, you might want to consider to host an event at one of New York's unique sites, like the Bronx Zoo or the New York Aquarium. How about the Museum of Contemporary Art's downtown facility with a spectacular view of the Manhattan skyline for receptions of up to 200 guests at the chic Sky Room; Ellis Island-American Family Immigration History Center offers space with up to 1,000 people for an event, or have a group experience the new Yankee Stadium and their upscale suites. Whatever, outside event choices you make, there are hundreds to choose from.

New York City consists of five boroughs, each with their own distinct qualities. Manhattan, an elongated island divided into several districts, is the quintessential New York people tend to think of when they picture the city. There is nothing like seeing Manhattan up close. For great shopping opportunities, check out trendy TriBeCa or bohemian SoHo. Lower Manhattan is home to Wall Street, the World Trade Center site and the departure point for the ferries to Ellis Island and the Statue of Liberty. Midtown is where to find the theater district (Broadway and beyond), with the bright and illuminated Times Square iconified as "The Crossroads of the World", and the Empire State Building, generally thought of as an American cultural icon, designed in the distinctive Art Deco style, named as one of the Seven Wonders of the Modern World by the American Society of Civil Engineers, and designated as a National Historic Landmark in 1986. Attractions like Central Park and its zoo, and the Metropolitan Museum of Art are located Uptown.

As a global hub of international business and commerce, New York City is one of three "command centers" for the world economy, that includes London and Tokyo. The city is a major center for banking and finance, retailing, world trade, transportation, tourism, real estate, new media as well as traditional media, advertising, legal services, insurance, theater, fashion, and the arts in the United States. Today, 45 Fortune 500 companies are headquartered in New York, along with the New York Stock Exchange and NASDAQ. Numerous colleges and universities are located in New York, including Columbia University, New York University, and Rockefeller University, which are ranked among the top 50 in the world.

New York City has over 28,000 acres of municipal parklands and 14 miles of public beaches with plenty to do outdoors. Central Park is the most visited urban park in the United States receiving approximately thirty-five million visitors annually. A national historic landmark since 1962, the park is bordered on the north by West 110th Street, the south by West 59th Street, and the west by Eighth Avenue. Along the park borders, these streets are known as Central Park North, Central Park South, and Central Park West and only Fifth Avenue along the park's eastern border retains its name.

Several natural-looking lakes and ponds are all man-made, while the park includes extensive walking tracks, bridle paths, two ice-skating rinks, with one becoming a swimming pool in July and August, Central Park Zoo, Central Park Conservatory Garden, a wildlife sanctuary, a large area of natural woods, a 106-acre billion-gallon reservoir with an encircling running track, and an outdoor amphitheater, the Delacorte Theater, which hosts "Shakespeare in the Park" summer festivals. On top of all that, there are indoor attractions that include Belvedere Castle with its nature center, the Swedish Cottage Marionette Theatre, and the historic Carousel.

A few other popular places to visit is the Statute of Liberty, the New York Botanical Garden, the largest such garden in any city in the United States. The city's 39 largest theaters, with more than 500 seats each, are collectively known as "Broadway," after the major thoroughfare that crosses the Times Square theater district. Take in a show or concert at the Lincoln Center for the Performing Arts, home to 12 arts organizations, or explore over two million pieces of art, from Egyptian to European, at the Metropolitan Museum of Art. The Empire State Building, one of the tallest structure in the city, remains a visitor must-see, while the Brooklyn Children's Museum's kid-friendly exhibits have been delighting families for over 100 years. From concert halls to baseball stadiums, museums to night clubs, New York City's attractions are just like its people: a diverse mix that's ready and willing to welcome its guests with open arms.

New York City has a humid-continental climate and experiences four distinct seasons, with hot summers, crisp and dry autumns, cold winters and mild and rainy springs. In New York City there is always something special going on for visitors. So no matter when you arrive in NYC, you'll find the summer time is big on al fresco dining and entertainment, the fall reaches it's height for performing arts, spring time is beautiful in the city parks, and when it comes to the holiday season, there is no better place to be than New York City. From Rockefeller Center to Radio City, the city is a happening party scene in the winter months, and the hotel rates are peak high season. If you are looking for a bargain, then January to early April offers the best rates.

Whatever type of group you represent, we can assist you in finding the perfect hotel venue for your upcoming event, by saving you time, and money. And, there is no charge for our service. Just complete our online group form requestand we will provide you with proposals by email, help you select the right hotel, and negotiate the best rates! All at no cost to you.