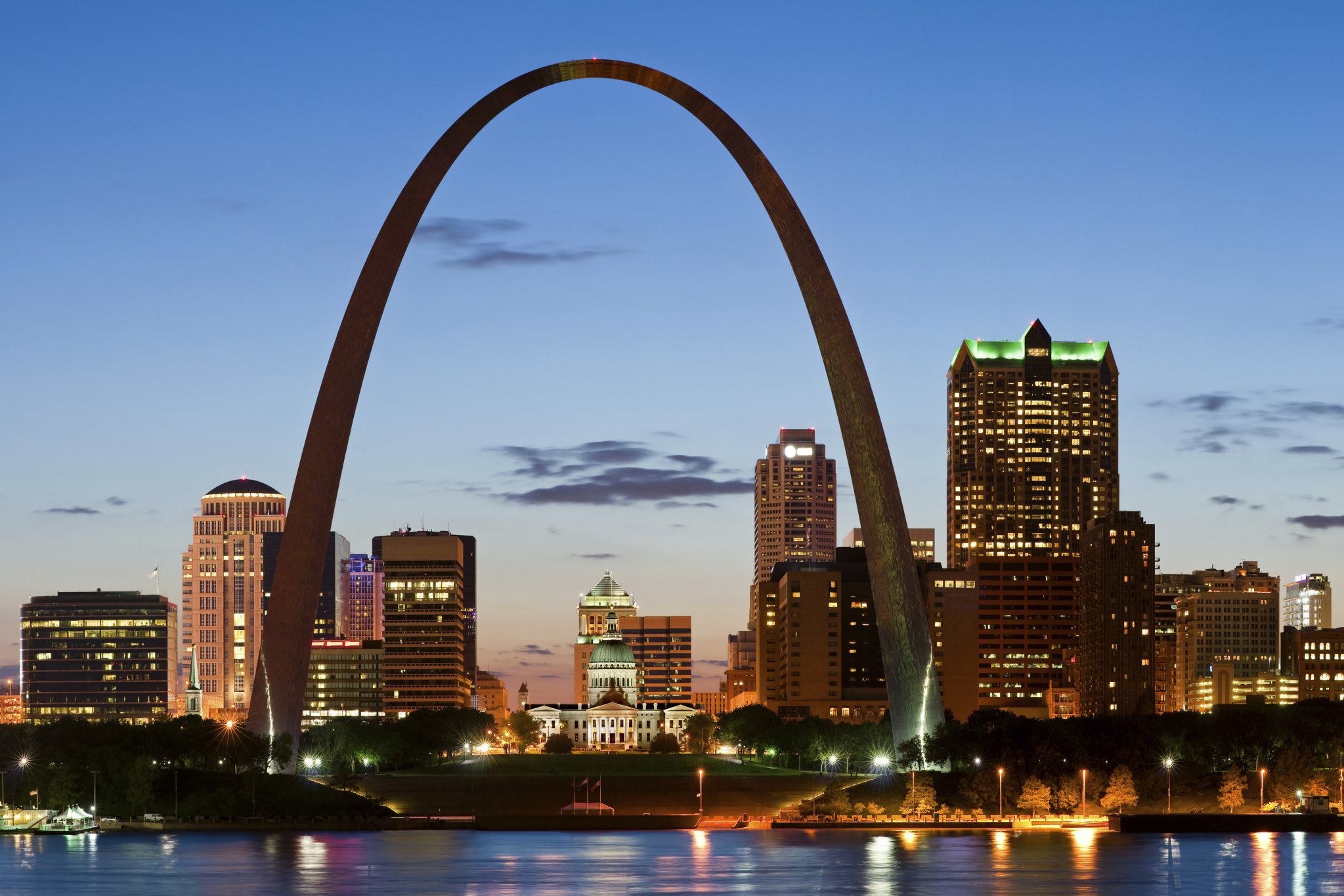 "The Gateway City" on the eastern border of Missouri.

Nestled in the heart of downtown St. Louis is the America's Center convention complex with 502,000 square feet of exhibit space, home to 4 distinctive meeting facilities housed under one roof, close to exceptional hotels, tantilizing restaurants, a riverfront with spectacular views, nightlife, entertainment and many interesting attractions to delight attendees while present at a small or large conference.

With over 30,000 affordable hotel rooms, an excellent assortment of cultural dining and upscale restaurants and attractions makes St. Louis a prime spot for any type of meeting or convention. The downtown St. Louis complex includes the Cervantes Convention Center, the 67,000 seat Edward Jones Dome, the St. Louis Executive Conference Center, ideal for up to 100 people with state of the art technology and amentities, and the Ferrara Theatre seating 1,400 people, add five exhibit halls, a 28,000-square-foot ballroom and more than 80 meeting rooms provided by the convention center, with easy access to the center and first class catering options, you have an all around excellent meeting facility for any type of event.

By vehicle, the city of St. Louis is served by four interstates, and several U.S. highways which makes traveling by car easy access to downtown and beyond. The Lambert-St Louis International Airport, located in northwest St. Louis county is about a 15 minute drive, has 11 airlines, provides nonstop service to nearly 60 domestic and international destinations. Two MetroLink stations directly link the airport's terminals to downtown St. Louis making transportation for attendees easy and convenient when arriving for a meeting or convention. Amtrak passenger service is served at the Gateway Multimodal Transportation Center downtown. Bus service, light rail and paratransit service in the city is provided by Metro. St. Louis and maintains a port authority for river shipping. Taxi cab service is another option for visitors to get around town.

The city operates more than 100 parks, that include playgrounds, concert areas, sports facilities, lakes and picnic areas. One of the significant parks in the city is the Jefferson National Expansion Memorial, a National Memorial on the riverfront in downtown St. Louis.

Other parks include the Missouri Botanical Garden, a private garden and botanical research facility with 79 acres of gorgeous indoor and outdoor garden displays, includes the Climatron, a greenhouse built as a geodesic dome; Tower Grove Park an amazing park for a wedding or reunion offers a variety of facilities and special services, all within the unique landscape of a National Historic Landmark; and Citygarden is an urban sculpture garden on the two blocks of the Gateway Mall between Eighth and Tenth Streets with art from Fernand L?ger, Aristide Maillol, Julian Opie, Tom Otterness, Niki de Saint Phalle, and Mark di Suvero. The Muny, the nation's largest outdoor musical theatre can seat over 11,000 guests and the St. Louis Zoo has event space that can accommodate up to 1,000 people.

Some other interesting places to hold meetings, receptions or parties is Busch Stadium, home to the St. Louis Cardinals, and the City Museum can both accommodate over 2,000 people. The renowned Italian community "The Hill," established by the Italian immigrants in the 1800s, serves world-famous authentic Italian cuisine, including St. Louis' original toasted ravioli. Forest Park, site of the World's Fair and now one of the nation's largest urban parks, still preserves some of the fair's original construction, along with a host of modern attractions such as the St. Louis Zoo and St. Louis Art Museum.

On the banks of the mighty Mississippi River, just north of the world famous Gateway Arch is Laclede's Landing, the oldest and only riverfront entertainment and dining destination in downtown St. Louis. Once a manufacturing, warehousing and shipping hub of St. Louis, is now home to over twenty fabulous restaurants, shops, clubs, theaters and attractions, a great place to explore its century-old buildings and cobblestone streets while visitors eat, drink and have fun. The Landing, known to the locals, has romantic carriage rides, breathtaking river views, historic architecture, delicious food, and exciting nightlife. On the north end of the historic area is Lumiere Place, it includes a 200 room Four Seasons and the Lumiere Place Casino and Hotel with 295 rooms.

Take a ride on replica 19th-century paddle-wheel boats, Tom Sawyer and Becky Thatcher, located on the riverfront below the south leg and see the Gateway Arch. While cruising down the Mississippi, enjoy cruise narration which offers a historical overview of the area and the role this working river still plays today. Tours are available or charter a riverboat for a private event.

This lovely and historic Missouri city was founded as a trading post in 1763 by French fur trader Pierre Laclede. Steamboats first arrived in St. Louis in 1818, river trade became more efficient and dependable, and the city flourished as a inland port for commerce and trade. Immigrants from Germany, Ireland and Italy arrived in significant numbers in the 1840's, causing the population to grow from 20,000 to 77,860 in 1850, just 10 short years, and with more growth and development, the construction of Union Station, the largest and busiest railroad stop in the country was built. The city was also selected to play host to the 1904 World's Fair and the Olympics, the first games to be held in an English speaking country.